■ to Japanese page
■ to Top Page

Kanai Katsu was born in 1936 the second son to a farming family from Kanagawa Prefecture, Japan.  In 1960, he joined the Camera Division of the Daei Film 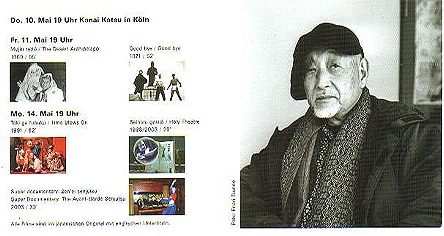 Corporation’s Tokyo Studios where he was mentored by Takahashi Michio and Kobayashi Setsuo.  Kanai left Daiei at the end of 1964 to work as a freelance cameraman and later filled numerous roles within the world of commercial film production.  In 1968, Kanai formed Kanai Katsumaru Production, and the following year saw the first of many films that Kanai would independently direct, produce and screen.  His Smiling Milky Way Trilogy, including The Deserted Archipelago, Good-bye, and The Kingdom positioned him as one of the pioneers of Japanese indies cinema.  While later working as a producer for television, Kanai developed a series of visual poems, The Stormy Times (aka Time Blows On). His recent work Super-Documentary: The Avant-Garde Senjutsu (2003) won the FIPRESCI International Critics’ Prize at the 50th Oberhausen International Short Film Festival, and Kanai was later selected for a special retrospective at the 53rd Oberhausen Festival (2007).  Kanai has authored The Smiling Milky Way (Renga Shobo-shinsha Publishing, 1981) and he now teaches at Tokyo Zokei University and the Image Forum Institute of the Moving Image. 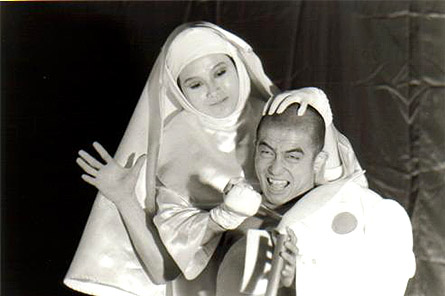 The Deserted Archipelago was my first independently directed and produced film.  The film won the Grand Prix at the Nyon International Film Festival and garnered considerable attention both overseas and in Japan.  The film follows an extremely simple story of a plain  boy who matures into manhood while constantly manipulated by nuns.  But woven into this  narrative are my own experiences and the history of postwar Japan as well as a series of fantasies.  The result is a multifaceted and multilayered objet, the birth of a newly sur-realistic filmmaking.  On August 15th, the day the war ended, I was in the third year of primary school.  That day, when the reality that I had known turned completely upside down, I was saddled with the trauma of no longer being able to believe in anything.  Searching here and there for some kind of spiritual salvation, I finally found the existentialism of Albert Camus.  From there, I was able to build up my own kind of existentialism and this film is best understood as based in that “Kanai Katsu Existentialism.”  The film was praised by European film scholars Max Tessier and Tony Rayns and was screened as part of “Eiga: 25 Years of Japanese Film,” a special program at the 1984 Edinburgh International Film Festival.
.
.

Good-bye   1971, 16 mm, b/w and color, 52 mins
.
Good-bye was filmed in 1970, right around the time of the Yodo Incident, when the Japanese Red Army hijacked a Japan Airlines plane and flew it to North Korea.  It was common then to describe Japanese- Korean relations as “the closest and farthest in the world.”  Of course, 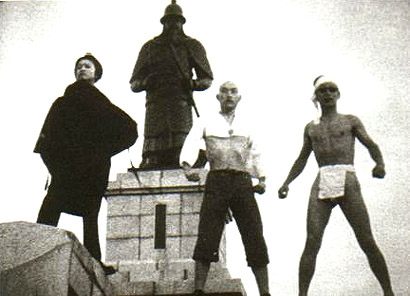 most Koreans, understandably, could not quickly forgive their long experience of colonialism under the Japanese, and most Japanese were content to ignore their neighbor and look instead towards the powers of Europe and the US.   But, the lion’s share of our ancestors came to Japan from the Korean peninsula.  I hail from Tana Village which is located in Kôza County in Kanagawa Prefecture (since renamed  Tana, Sagamihara).  But Kôza County was first called Kôkuri County by the people who settled it.  They emigrated from Koguryo [Goguryeo], an ancient kingdom in the north of Korea—and there is an obvious resemblance between the two place names.  Even my family name, Kanai, shares this connection: it suggests metalwork, and we know that the early immigrants from Korea possessed fine metalwork technology.  Most likely, my ancestors were among these metal-workers.  It’s with this background in mind, then, that I made Good-bye.  The protagonist is an aphasic young boy who meets, on one of his regular paths, a “Koguryo Beauty” who shows him how to trace his roots.  That this search takes place in a 1970 Korea that was still under martial law lends a further tension to the story, but it doesn’t stop there. Within this drama lies yet another, making Good-bye a one-of-a-kind road movie.
.
.
The Kingdom  [Ôkoku], 1973, 16 mm, color, 80 mins
.
My first film, The Deserted Archipelago, emerged out of the intersections between my own experiences and fantasies and Japan’s postwar history, and, as such, I might call it the “Human Chapter” of my trilogy.  In contrast, Good-bye pursues the mystery of my distant DNA. Since it moves from blood to land, I might call it the “Earth Chapter.”  Following these two narratives came The Kingdom. Even if we were to deny all gods, there is one god controlling us, one god whom we cannot refuse: the god of time. The Kingdom was my challenge to that god of time as well as the finale, “The Heavenly Chapter,” to my Smiling Milky Way Trilogy.

The story is about a popular poet, Goku Katsumaru, who grows depressed when his editor jokingly implies that he is a “sell-out to his times.”  Around Goku appear first a “Team of Pickpockets With Plans to Steal Time” and later the Bird Doctor who develops his research on migrating birds and, in particular, their internal clocks,  “to liberate himself from the bonds of time.” Goku , who now dreams of becoming a poet for all time, employs the knowledge he has acquired from these men to travel from a field in the Hachioji suburbs of Tokyo all the way to the Galapagos Islands, where he attempts a total transcendence.  The film is both an incredible adventure story as well as the kitsch formulation of a new “myth.”  I had been challenged by the words of the young Ôshima Nagisa, who declared “I won’t accept something as cinema unless it is founded in an absolutely new story and an absolutely new methodology.  We cannot be allowed to imitate ourselves.”  While there are some points in common across each of the three films in this trilogy, I truly did my utmost to distinguish them at both the level of story and method—to maintain their distinct and unique qualities.  In the last scene of The Kingdom, just as Goku’s face can be seen shining beneath the twinkling night sky, you see the face of Kanai Katsumaru, the protagonist from Good-bye, and then that of Hidekuni, the lead in The Deserted Archipelago, and finally, across the whole screen appear six faces without even eyes or noses.  The latter were nods towards my films yet to come.

The Kingdom was selected for second place in the Asahi Newspaper’s “Best Five from 1973.”  The Japanese film journal, Eiga Hyôron (Film Review), listed the film in 9th place among its Best Ten of the Year.  And Max Tessier wildly praised The Kingdom in the French film magazine, Ecran.  I heard that Tessier even took the film to Cannes himself and screened it there, giving his own running translation of the dialogue.  I’m still indebted to Tessier’s enthusiasm!
.
.
The Stormy Times (aka Time Blows On) [Toki ga fubuku], 1991, 16 mm, color, 62 mins 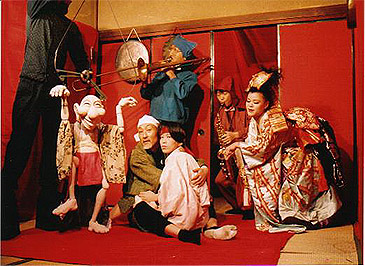 As I approached the age of fifty, I wanted to express my state of mind through a new methodology and the first effort in that direction was this series of visual poems.  In 1987, I presented the tanka film Dream Running, in 1988 the haiku film Grasshopper’s One-Game Match, and in 1989, the poetic collection We Can Hear Joe’s Poem, each of which I presented at the annual Image Forum Festival.

A Tanka Film: Dream Running is a kind of experimental period piece. The story is contest between age and youth in the arenas of both cinema and love.  The special effects cinematography I produced using my Bolex was innovative and won me a lot of praise; the film was awarded the best short film prize at the Melbourne Film Festival.  It has been screened in Europe, the United States, Canada, Australia, and New Zealand

A Haiku Film: Grasshopper’s One-Game Match is an 11-minute film made using only the 400 feet of film that my Bolex can hold.  Its one-shot follows me around the rooms of my house to capture “the everyday and the fantastic.”  The start to this film was the nightmare of losing my dear friend, the film director Jônouchi Motoharu, in a car accident.  Jônouchi had appeared in my previous Dream Running.  This film has the patina of age that you can’t achieve in video.

A Poetic Film: We Can Hear Joe’s Poem. Jônouchi was a regular visitor to my house and he appeared in two of my films, The Kingdom and Dream Running. For me, the places where Jônouchi had been became like little rooms that extended from my brain cells, and I could feel Jônouchi’s memory there somehow. My hallucination takes me from the house to the garden, and there the poem that Jônouchi wrote, “Shinjuku Station,” begins to circle round and round with an overwhelming presence.

Each of these three films has its own individual history, but when I screened them together as a memorial to Jônouchi, I added two documentary images, and the series became The Stormy Times.
.
.
Holy Theater  [Sei naru gekijo],color, video, 1998, 29 mins,
. 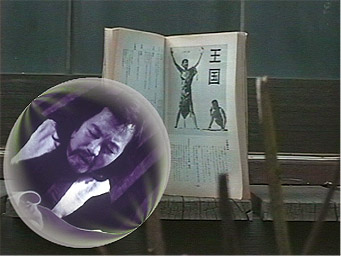 Holy Theater is a film whose stage is nothing more elaborate than the garden behind my house, and it’s a film that’s still evolving.  It’s said that people die twice.  The first death is a physical one and the second, true death comes when there is no one to remember that person.  When I screened the first version of Holy Theater (at the Image Forum Festival in 1989), four of the actors from The Kingdom had already entered the demon’s ledger, as they say in China.  Each was a dear friend, and each was a uniquely talented individual: Jônouchi Motoharu, a pioneer of Japanese avant-garde film, Ôsaka Toku, a bartender who truly understood me and who fell from the skies over Sakhalin, Satoh Jyushin, a film critic whose uniquely keen nose meant a constant discovery of new art films, and Yamatoya Atsushi, that grandest of dandies, at once director and screenwriter and actor. I thought I might keep them forever on this earth with Holy Theater.  In its Act One, we see performances by some little animals, but since I continue to film their captivating moments of action, I like to call this piece my evolving film.
.. 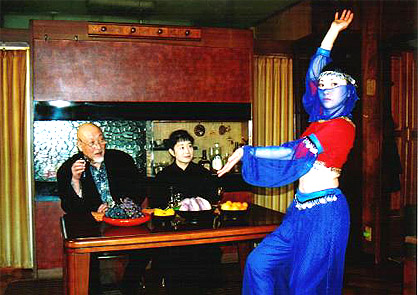 .
.
When first screened at the 2003 Image Forum Festival, this video work provoked a lot of commentary; it was also selected for the International Critics’ Prize at the 50th Oberhausen International Short Film Festival.  As we age, a lot of our bodily functions grow worse for wear, but lurking within me was another being, Katsumaru, who really doesn’t want to live his life as if it were a mere supplement to more youthful days.  Katsumaru develops the special powers of an avant-garde mystic and spends his days and nights practicing his techniques.  And lo and behold, this Katsumaru could summon two mountain pigeons and make them build a nest!  Katsumaru completed many “miracles” including the rearing of these birds’ young chicks. But these are no feats of fancy, nor tricks of magic.  The mystical occurrences are veritable events that unfold before your eyes, captured in this uniquely mysterious film.